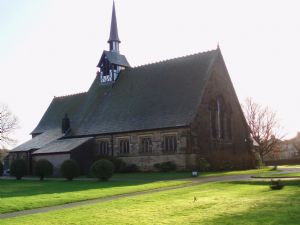 'For generations there was no church at Salesbury. Local landowners had private chapels, as at Salesbury Old Hall, Showley Hall, and possibly also at Lovely Hall. Tenants and servants attended these, but for baptisms, marriages and burials the people went to the Parish Church of St. Mary at Blackburn, or to St. Wilfrid’s at Ribchester. The five miles to church at Blackburn or Ribchester would have been no distance for the devout, but would only have been undertaken on special occasions by the less religious. The population increased at the end of the eighteenth century with the boom in weaving, and Viscount Bulkeley and other landowners raised the money to build a ‘chapelry’ or chapel-of-ease for Blackburn at Salesbury .... '

Read on by 'clicking' on this link for a full History of the Church.