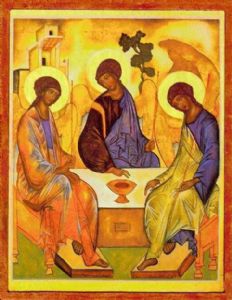 We do not realise the significance of the Holy Trinity because there is no story to tell. Christmas has shepherds, wise men, angels, and the birth of Jesus. Easter has a garden, betrayal, a Roman governor and a city, , where a man was crucified and rose from the dead. But where is the story about the Holy Trinity? The Trinity is simply about a triune relationship of Creator, Redeemer, and Inspirer. Whoever has seen Jesus has seen the Father says John 14:9; Jesus is in the Father and the Father in him - John ; Jesus is coming - John 14:3 and the Spirit is coming (John 16.13). The three are inseparable - put another way, imagine the Trinity as a trio of musicians playing a piece of music especially written for the three of them. Together they make sense and a beautiful sound – take one or two away and what would you have – something that likely makes no sense at all.

Andrei Rublev’s 15th century piece of art depicting the three angels who visited Abraham at the Oak of Mamre that we read of in Genesis 18:1-8 has long been interpreted as an icon of the Trinity. This sublime image does not ‘illustrate’ the Trinity, although there is clearly more to be seen here than the meeting of three strangers at a table. Firstly, take a moment to look at the icon and see what detail you can pick-up that at first glance goes unnoticed. This icon takes as its subject the mysterious story where Abraham receives three visitors as he camps by the oak of Mamre. He serves them a meal. As the conversation progresses he seems to be talking straight to God, as if these 'angels' were in some way a metaphor for the three persons of the Trinity. In Rublev's representation of the scene, the three gold-winged figures are seated around a table on which a golden, chalice-like bowl contains what has been described by some as lamb. In the background, a house can be seen at the top left and a tree in the centre. Less distinctly, a rocky hill lies in the upper right corner. The composition is a great circle around the table, focussing the attention on the chalice-bowl at the centre, which perhaps reminds you of an altar at Communion.

On one level this picture shows three angels seated under Abraham's tree, but on another it is a visual expression of what the Trinity means, what the nature of God is and how we approach him. Reading the picture from left to right as we look at it, we see the Father, the Son, and the Holy Spirit. Rublev gives each person of the Trinity different clothing. On the right, the Holy Spirit has a garment of the clear blue of the sky, wrapped over with a robe of a fragile green. So the Spirit of creation moves in sky and water, breathes in heaven and earth. All living things owe their freshness to his touch.

The Son has the deepest colours; a thick heavy garment of the reddish-brown of earth and a cloak of the blue of heaven. In his person he unites heaven and earth, the two natures are present in him, and over his right shoulder there is a band of gold running through the earthly garment, as his divinity suffuses and transfigures his earthly being.

The Father seems to wear all the colours in a kind of fabric that changes with the light, that seems transparent, that cannot be described or confined in words. And this is how it should be. No one has seen the Father, but the vision of him fills the universe.

The wings of the angels or persons are gold. Their seats are gold. The chalice in the centre is gold, and so is the roof of the house. Whether they sit, whether they fly, all is perfect, precious, and worthy. In stasis, when there is no activity apparent on the part of God, his way is golden. The light that shines around their heads is white, pure light. Gold is not enough to express the glory of God, only light will do, and that same white becomes the holy table, the place of offering. God is revealed and disclosed here, at the heart, in the ‘whiteness’ of untouchable light.

The Father looks forward, and it is difficult to tell whether he looks up at the Son or down to the chalice on the table, but his gesture expresses a movement towards the Son. ‘This is my Son, listen to him…’ The hand of the Son points on, around the circle, to the Spirit. In this simple depiction we see the movement of life towards us, The Father sends the Son, the Son sends the Spirit. The life flows clockwise around the circle and we complete the circle. As the Father sends the Son, as the Son sends the Holy Spirit, so we are invited and sent to complete the circle of the Godhead - with our response.

We respond to the movement of the Spirit who points us to Jesus. And he shows us the Father in whom all things come to fruition. This is the counter-clockwise movement of our lives, in response to the movement of God. In this counter-acting way the Spirit touches us and leads us by ways we may not be aware of to Jesus, the Son of God, and it leads to a tree. A great tree in the heat of the day spreads its shade. It is a place of security, a place of peace, a place where we begin to find out the possibilities of who we can be. It is no ordinary tree. It stands above the Son in the picture, and stands above the altar-table where the lamb lies within the chalice.

The table or altar lies at the centre of the picture. The holy meal brought to the table. All points to this space, this mystery. Within it, everything about God is summed up and expressed, his power, his glory, and above all, his love and it is expressed in such a way that we can reach it. For the space at this table is on our side. We are invited to join the group at the table. We are invited to complete the circle, to complete the movements of God in the world by our own response.

What do you see in the icon? How does it speak to you?